2017 is undeniably the year of sustainable and organic eating. In a world where whole foods are taking priority, home cooks and chefs alike are looking to become more environmentally conscious in their food prep practices. This awareness stems from consumers taking an active interest in how and where their foods are produced, and the way in which it reaches their local grocery stores. Not to mention that food waste is becoming increasing salient, with gracelinks.org reporting that in the US alone, 40 percent of our food supply is thrown away each year.

So how can you become more aware of your environmental footprint when preparing meals? Read on to find out.

Cut down your meat intake

Reducing red meat from our diets has been widely promoted in recent years, and for good reason. Beef farming is a significant contributor to greenhouse gas emissions, and the environmental burden of raising and transporting livestock requires considerably more energy than plants. Cows, chickens, and pigs have also been the subject of many reports of abuse during the farming process, as referenced by PETA, particularly during factory farming. Nuts and legumes are great protein alternatives, and mix well with vegetables and fruit for interesting flavor combinations. 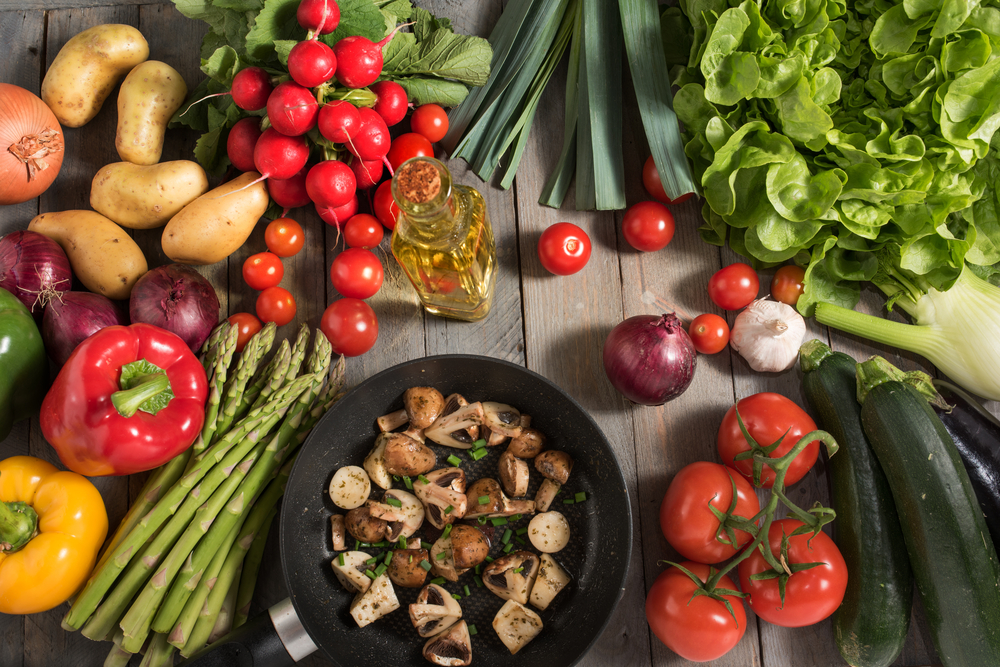 You may have heard the adage that you should fill half your plate with fruits and vegetables. According to hsph.harvard.edu, planning a meal based on the kinds of produce available helps “Reduce freshwater withdrawals and deforestation—a win-win for both our personal health and the environment.”

So the next time you’re out grocery shopping, load up on the good stuff; carrots, cucumbers, peppers, mushrooms, broccoli, tomatoes, bananas, apples, pears … you get the idea. If you’re interested in trying more vegetarian/vegan dishes, you can find a list of our delicious vegan recipes right here.

Look to the locals & eat (and cook) in season

One of the best things to come out of food transparency is the rise of the farmers market. With fresh, locally-grown produce available from the people who grow it, buying your food from farmers markets is a great way to see where and how your food is made.

Eating produce that’s in season also helps local farmers and businesses because they require less assistance to grow. This means that fewer pesticides and chemicals will have been used, as well as less human interference. Not only that, eating in season eliminates the need to buy imported foods which lowers your carbon footprint. This same advice goes for restauranteurs, growing the produce yourself is yet another way to minimize environmental impact. Plus, it’s always more satisfying to eat something you’ve grown yourself!

Fish is a delicious and healthy addition to any diet. However, we should be careful not to target species that are being overfished, as some fish species are unable to reproduce as fast as they’re caught. Sometimes the practices used to catch fish can also be damaging to the environment, seafloor and even other animals that are not specifically being fished. In situations like these, try something new!

What to do (and ask) at restaurants

So we’ve given you a few ideas to act sustainably while you’re out for your weekly groceries. But what about when you’re out enjoying a meal at a cafe or restaurant?

First and foremost, cut down on packaging – ask for your drinks from the tap.

Also, don’t be afraid to ask your waiter (or the chef!) how they source their ingredients. As it turns out, according to restaurant.org, “Diners want to know as much as they can about what they’re eating, especially at restaurants. They want to understand everything – from the way a certain food tastes to how the farmer grew it to how far it traveled to get to the plate.” Subsequently, this insight has helped to inform chefs that consumers are interested in stories; where the food is from, how it ended up on their plate, and how it’s impacting the environment around them.

Have any thoughts about the sustainable and organic food trend? Maybe you’ve even got some tips of your own to recommend? Get in touch with us on our Facebook page!

The Art of Dosha Dining

I Can’t Believe It’s Not Meat

All About Being Vegan