Salt and Sodium: What is the Difference?

Salt is composed of two minerals; sodium (Na) and chloride (Cl). Salt or table salt (NaCl) is the combination of these two naturally occurring elements with the mineral sodium making up 40%, and chloride 60%, of salt.

There is no difference between salts, it does not matter if it is pink or white in crystal form, it is all the same to the human body. The only advantage to natural salts is that they may provide other minerals to the body.

Sodium found in salt is important and essential for life. The body uses sodium to keep cells healthy. Along with potassium, you need sodium so that nerves can function properly and your muscles can contract. Sodium helps balance out the body’s fluid, electrolyte and pH levels.

Daily intake of salt should be around 5 grams per day, this equates to 2,300 mg of sodium. However, most Australians exceed this by consuming 9 grams daily which equates to 4140 mg of sodium per day. It’s therefore important when comparing sodium content between products on the supermarket shelf to pick those with the lower sodium % of daily intake. 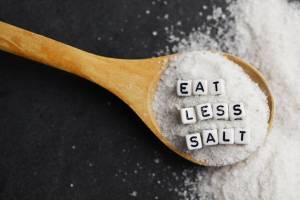 Sodium is found in almost every food we eat, but the amount varies. Foods such as vegetables and fruit have naturally occurring sodium present in small amounts. Even if you think your diet is low in sodium, that will depend on the foods you include in your daily intake.

Food high in sodium may include:

High sodium intake impacts the body and your health in many ways and is linked to conditions other than high blood pressure such as: 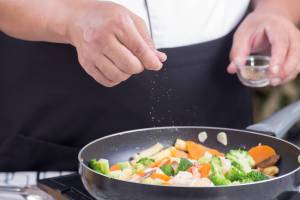 How to balance your daily sodium intake:

Below is a quick reference guide to help you understand and manage your individual sodium intake daily:

Sodium is important for the human body to function properly, however, too much can have a negative impact on health.

Serve and eat foods lower in sodium and eat well.